I think we can collectively say good riddance to 2020.

The North Atlantic Right Whale would likely be one of the first in line to list its grievances. At the start of 2020, there were 409 Right Whales in the Atlantic. But by the end there were only 356 left. A crushing number have been lost. And scientists say they could be at risk for extinction by 2040.

Should we just give up? Or is there still hope for the Right Whale?

What They’re Up Against: Ship Strikes 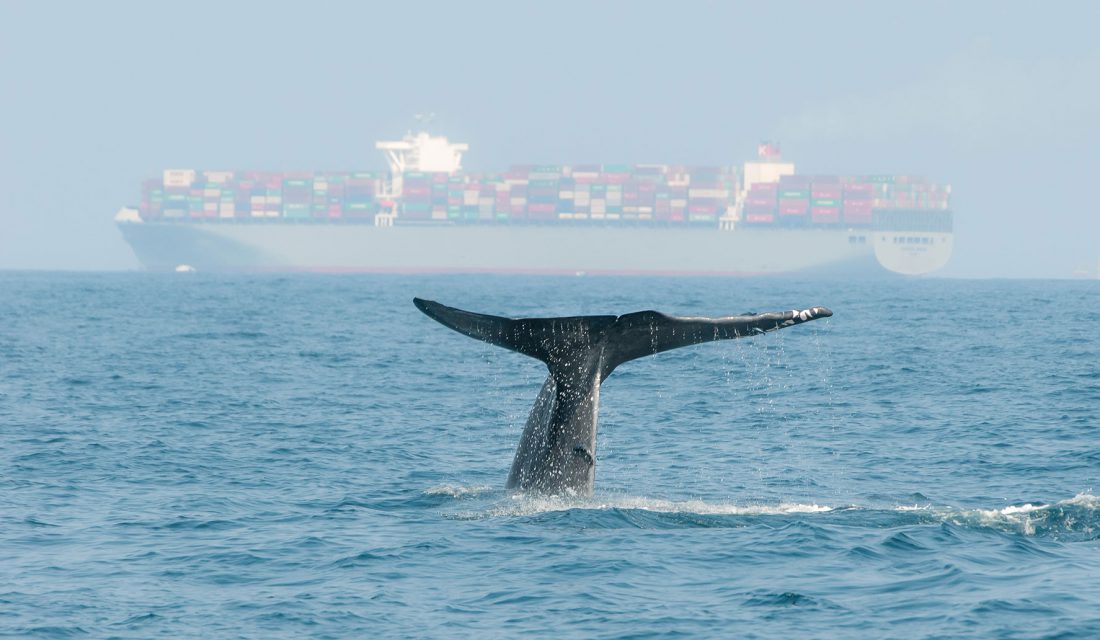 Both big and small shipping vessels can kill these remarkable creatures, and while many people may see a whale swimming off normally after being hit, they may have suffered from extensive injuries that could lead to death soon after the strike. Necropsies performed on whales have found that ship strikes can fracture bones, cause severe hemorrhaging to their tissue and damage the blood vessels around the dorsal fin.

CWF is working hard to track these marine mammals in the hopes of keeping them safe. Back in 2007, both the Grand Manan Basin in the Bay of Fundy and the Roseway Basin off of Southwestern Nova Scotia were listed as critical habitat to the North Atlantic Right Whale, but since then we’ve discovered that many Right Whales also feed off of the Southern Gulf of St. Lawrence. Learning where these creatures go (to breed, forage, and more) will help us decide which areas need to be protected.

Moreover, we are learning all we can about the vessels on our waters. Did you know that in 2016 alone, there were over 15,000  fishing boats registered in Atlantic Canada? Boats, both big and small, can do a lot of damage to these marine mammals. While these boats are not usually going incredibly fast (they usually travel under 10 knots), setting a speed restriction for these fishing boats may help to reduce the risk of injury and death in our whales.

What They’re Up Against: Entanglement 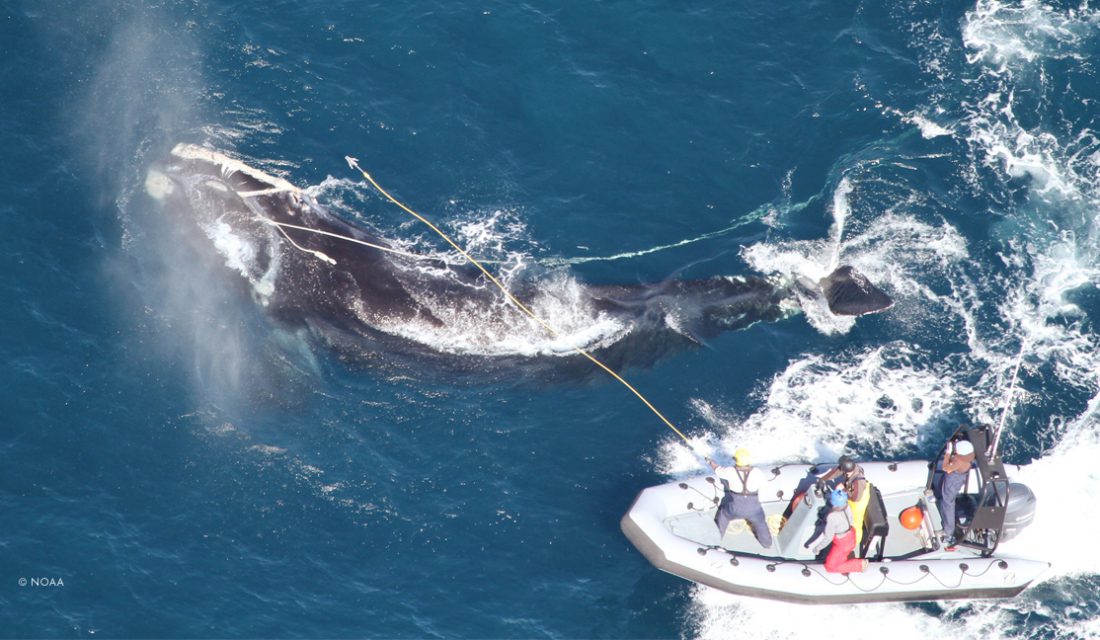 Every year about a quarter of North Atlantic Right Whales become entangled in fishing gear. Some result in minor scars, but others involve ghastly deaths. An entangled whale has a harder time to move around freely, reproduce and eat. Entanglements can lead to infection and even cut through to the muscle and bone.

When a whale can’t escape the binding, they can drown or their deaths can be drawn out for months. The fact that 83 per cent of North Atlantic Right Whales have scarring from entanglement in fishing gear proves that this threat is incredibly real for these mammals.

CWF is working with fisheries to discover where the whales are so their boats can move out of the whales’ way. We’ve developed a predictive model that lets us examine where fishers will move to if and when they do have to move from their usual fishing ground to ensure that they’re still able to do their job.

Our marine team has been working hard on ropeless fishing gear as well. Since the issue with traditional fishing gear is all the vertical buoy lines, ropeless gear operates without these lines – eliminating or dramatically reducing the risk of entanglement to whales. In 2019, we started testing ropeless fishing gear at sea to determine its potential for commercial fisheries in Atlantic Canada.

What They’re Up Against: Lower calving rates 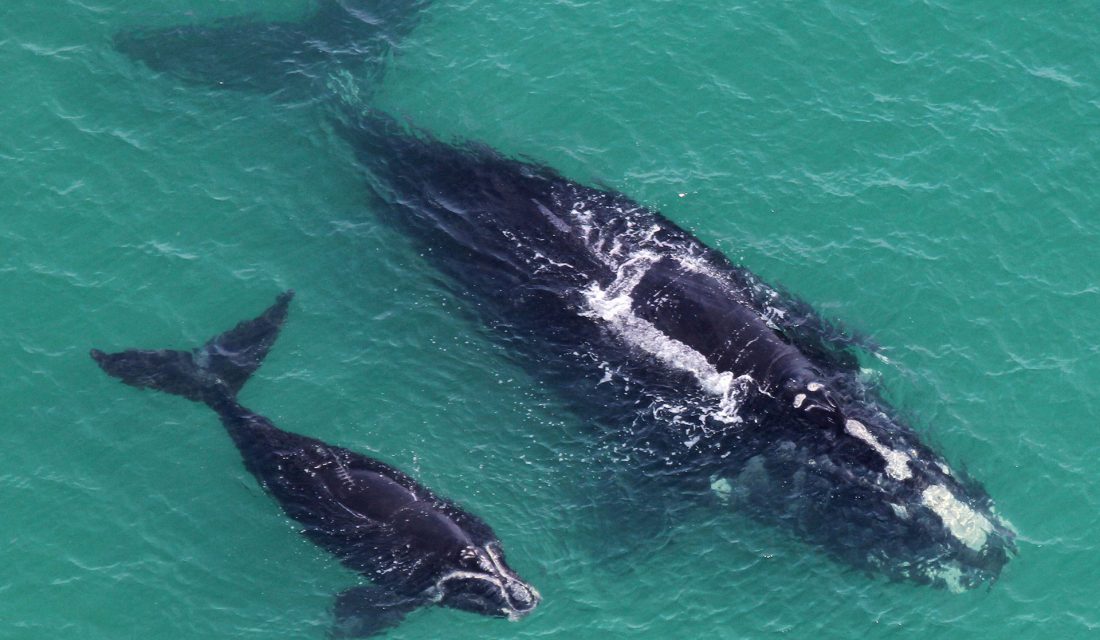 For an endangered species, the population of North Atlantic Right Whales grows painfully slowly. Females carry their pregnancies for about year, and then nurse and raise their calves (usually there is only one calf born to a single whale) up to two years. Moreover, their calves will stick close by to their mothers until they’re ready to become moms themselves – around the age of ten.

In the meantime, both young and old are threatened by ship strikes and entanglement and sadly more whales are being killed than being born. Not only are they threatened by human activity, but researchers have found that females are taking longer and longer to give birth. While they should be giving birth to a calf every three to four years, they are now giving birth every six to ten years. This is a huge shift!

We need to protect females and their young at all costs. Once a calf is sighted, researchers are making a point of keeping track of them several months after birth. They aren’t born with callosities (which are markings unique to individual Right Whales) and so as they appear over the coming months, researchers make note and document these markings through the lifetime of the individuals.

It’s clear by now that the Right Whale’s situation is dire. This species needs our help if they are going to have a chance of surviving. But they have so many people rooting for them and working tirelessly to keep them safe.  We at the Canadian Wildlife Federation are doing everything in our power to keep Right Whales swimming in the Atlantic for years to come.

Learn more about the North Atlantic Right Whale and our Coasts & Oceans. 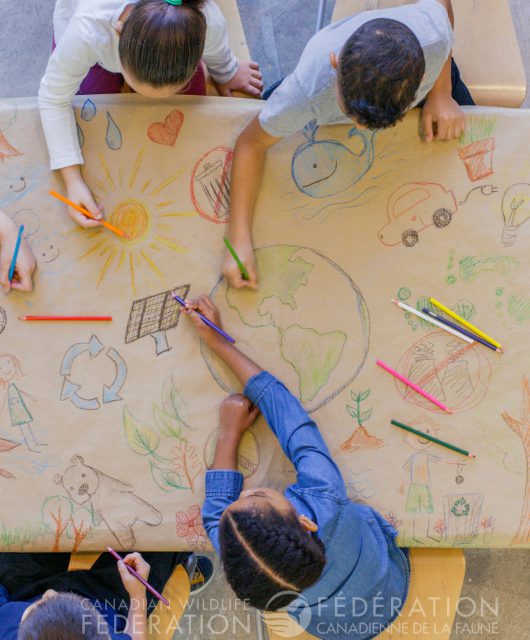 Wild Dates to Keep in Mind for This School Year 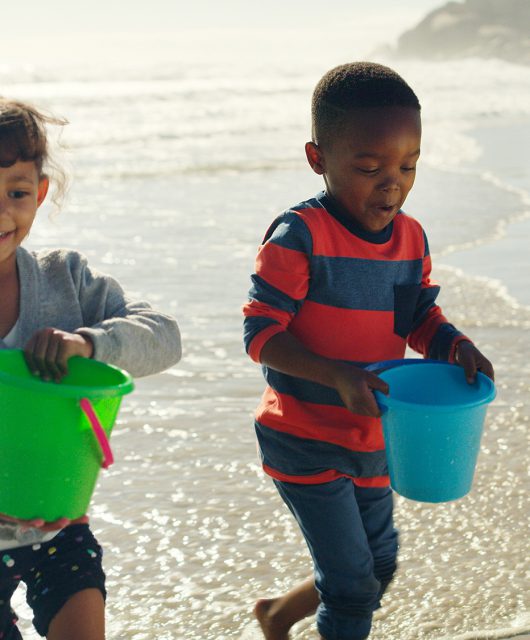 Virtual Road-Trip: Beachgoing at the Bay of Fundy