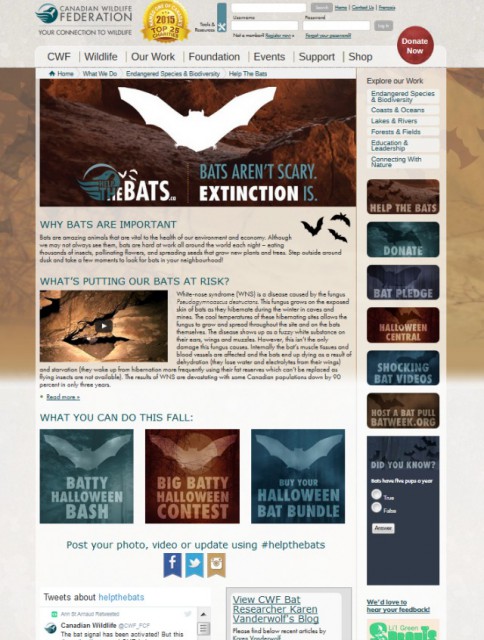 Bat Week is coming up! During Bat Week, October 25-31, CWF invites you along with our initiative partners to host an invasive plant pull to help improve habitat and food for bats and other wildlife. Bats need to eat lots of different insects to stay healthy. When invasive plants move in, they push out our native plants. Native plants support a huge variety of yummy insects; invasive plants don’t. By hosting a “Pulling for Bats” event, you can keep your weed warriors engaged this fall and help out bats! Be sure to visit our website HelpTheBats.ca to learn more about this event and for lots more information! Pictures of your event can be posted to https://www.facebook.com/BatWeek/

We recently had another scientific paper published!

Big Brown Bats generally hibernate in buildings in Canada due to cold temperatures, while farther south they hibernate in caves. We found that some Big Brown Bats hibernating in buildings carry the fungus that causes white-nose syndrome. These bats did not seem to have white-nose syndrome themselves (Big Brown Bats tolerate white-nose syndrome better than Little Brown Bats). This means that these bats may play a role in dispersing the white-nose fungus. Since the white-nose fungus primarily resides in caves, it is interesting to speculate how the Big Brown Bats in buildings acquired the fungus. Before going into hibernation, bats engage in a behavior called ‘swarming’. Swarming is already well under way here in Canada and will taper off during October as temperatures drop. During swarming, bats will congregate at the entrances to caves and other structures bats use for hibernation. Bats will often fly to multiple caves during this period. This is the mating season so there are lots of social interactions taking place. Scientists believe that swarming also teaches juvenile bats where the best places to hibernate are located. With so many social contacts and traveling cave-to-cave, you can imagine that the white-nose fungus can be spread during this period from bat-to-bat and to multiple caves. This may be how the Big Browns Bats we examined first acquired the fungus.

The Quest to Find Canada’s Great Whales: Welcome to the search!