Laura Newman is a participant in Group 2 of the Canadian Conservation Corps. She writes of her experience in her field learning placement.

It’s true! Every summer our waters are invaded by gentle giants from the south! 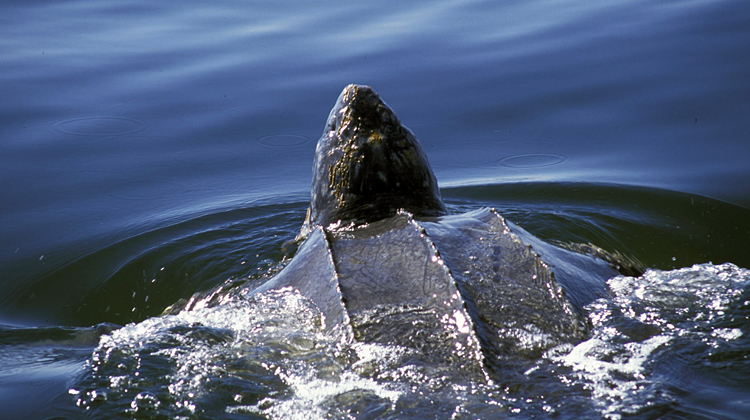 I didn’t know much about Leatherback Sea Turtles before getting to Halifax. But, in a short amount of time, I’ve learned that they’re pretty cool: they’re huge, they’re ancient and they’re endangered.

Leatherback sea turtles migrate up to Atlantic Canada in the summertime, all the way from South America. They don’t have any teeth, but they have spikes in their esophagus that help them eat their favourite food — jellyfish! They can eat their weight in jellyfish everyday, and that’s really saying something because the average adult Leatherback Sea Turtle can weigh 450 kilograms!

Getting to Know Leatherbacks

We arrived in Halifax a couple of days ago, and were warmly welcomed by Kathleen, one of the founders of the Canadian Sea Turtle Network. We have already begun training at the Sea Turtle Centre, which is right downtown in the harbour. We have learned all kinds of interesting things.

These turtles are extra cool because instead of having a scaly shell like most turtles, theirs is covered by a leathery skin. They can hold their breath for an hour, and they have been known to dive as deep as one kilometre underwater — deeper than any other sea turtle. They’ve also been around for about 100,000,000 years!

Leatherback Sea Turtles are gentle giants who don’t have much in the way of natural predators in the ocean. But one of their biggest threats as adults is getting caught up in fishing gear. This is why The Canadian Sea Turtle Network works closely with fishermen to help save these awesome creatures.

How We Can Help

Some of the things that we can do as individuals to help the sea turtles are to use less plastic and avoid plastic bags — a lot of our plastic garbage ends up in the ocean, and sea turtles can’t tell the difference between your old grocery bag and a nice, tasty jellyfish.

Blow bubbles instead of balloons. Trust me, I love balloons as much as the next person, they’re colourful and fun and they remind me of birthday parties! Eventually, though, they pop and then they land somewhere they don’t belong — in waterways and oceans, just like plastic bags. Blowing bubbles instead is a harmless and fun alternative!

I’m looking forward to learning more as I continue with my placement!

Laura is a participant in Group 2 of the Canadian Conservation Corps. What's the issue closest to her heart? She really cares about keeping wild things wild and saving natural spaces for generations to come.

What An Eggshell Can Tell You